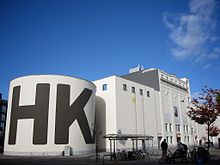 Museum of Contemporary Art was founded in 1982 by the Flemish Community. M HKA’s first director was Flor Bex until 1992. In 2002, Bart de Baere took position. The architect responsible for the creation of the museum from an old grain storage space (1987) was Michel Grandsard who also designed the extension of the museum (1997) [2]. Current exhibition curators are Nav Haq, Liliane Dewachter and Anders Kreuger [3]. From 2003 until 2011 Dieter Roelstraete was a curator at the Antwerp Museum of Contemporary Art (MuHKA)