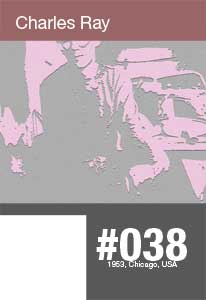 courtesy of collectionofthefame.net
Charles Ray is widely regarded as one of the most significant artists of his generation. He is best known for his sculptures of altered and refashioned familiar objects. In 1993 Ray made Firetruck, a 12-by-47-foot replica of a toy fire truck, which he “parked” in front of the Whitney Museum of American Art during that year s biennial exhibition. In 2007 the artist completed a ten-year project?a re-creation in Japanese cypress (Hinoki) of a fallen and rotting tree he had found in a meadow, hand carved by Japanese master woodworkers. In 2009 Ray installed Boy with Frog, his first outdoor commissioned work, at the Punta della Dogana in Venice. Grand in size and realized with a smooth white finish that references the important tradition of marble sculpture in Italy, it depicts a boy holding a goliath frog above the Grand Canal. In 2015 the artist completed Horse and Rider, a ten-ton equestrian statue machined from solid stainless steel, with Ray himself as the rider.
Source :http://www.matthewmarks.com/new-york/artists/charles-ray/