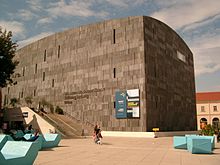 The museum has a collection of 10,000 modern and contemporary art works, including major works from Andy Warhol, Pablo Picasso, Joseph Beuys, Nam June Paik, Wolf Vostell, Gerhard Richter, Jasper Johns and Roy Lichtenstein. Over 230 art works were given to the museum by the German industrialist and art collector Peter Ludwig [de] and his wife Irene in 1981.

Since 2001, the museum has been housed in a stone-clad building designed by Austrian architects Ortner & Ortner.[1]

The Mumok regularly organizes special exhibitions and is known for its large collection of art related to Viennese Actionism.