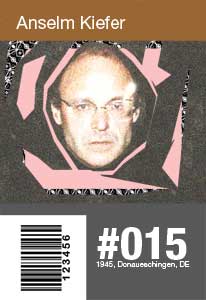 courtesy of collectionofthefame.net
Kiefer was born on March 8, 1945 during the final months of World War II. The son of an art teacher, Kiefer was drawn to art and saw himself as an artist. He was raised in a Catholic home in the Black Forest near the eastern bank of the Rhine, an environment that would play a formative role in his development as an artist and would provide imagery and symbolism for his work. His family moved to Ottersdorf in 1951 and Kiefer attended grammar school in Rastatt.Although he had artistic ambitions from an early age, Kiefer studied law and Romance languages between 1965 and 1966 at the Albert-Universitat, Freiberg. Soon thereafter he abandoned his aspiration to become a lawyer to focus solely on visual art, taking classes with the influential painter Peter Dreher at the Staatliche Akademie der Bildende Kunste in Karlsruhe. During this period, at the age of 24, he also traveled extensively throughout Europe.
Source :http://www.theartstory.org/artist-kiefer-anselm.htm#biography_header