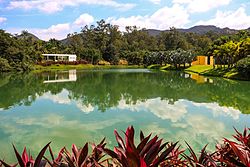 The Inhotim (Inhotim Institute) is home to one of the largest foundations of contemporary art in Brazil and one of the largest outdoor art centers in Latin America. It was founded by the former mining magnate Bernardo Paz in 2004 to house his personal art collection, but opened to the public a couple of years later. In 2014, the open-air museum was one of TripAdvisor’s top 25 best-ranked museums in the world.

Located in Brumadinho (Minas Gerais), just 60 km away from Belo Horizonte, the institute has a total area of 1942.25 acres, mostly located in the biome of the Atlantic Forest. Of the total area, 1087.26 acres are marked as preservation areas, of which 359 acres are part of the Reserva Particular do Patrimônio Natural RPPN, which makes it a natural heritage site. These geographic features made it possible for Inhotim to house a botanical garden, which has been developing since it was opened.