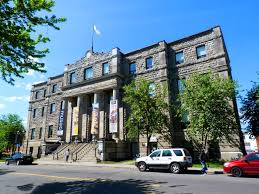 The Musée d’art contemporain des Laurentides is a Quebec museum dedicated to contemporary art. The museum occupies premises in the former courthouse of the city of Saint-Jérôme, one of the heritage buildings adjoining Parc Labelle.

From its inauguration until 2010, the Musée d’art contemporain des Laurentides (MAC LAU) presented more than 236 exhibitions. It registers nearly 20,000 visitors each year, including over 6,000 young people through educational programs.

The MAC LAU’s mission is to publicize, promote and disseminate the production of visual artists, with an emphasis on contemporary and current art. The Museum also has a mandate to conserve, document, distribute and make accessible the works of its collection, which is mainly composed of works by artists from the Laurentians.

The year 2014 will be marked by the museum recognition granted to MAC LAU by the Quebec Ministry of Culture and Communications. The Musée d’art contemporain des Laurentides thus becomes the first officially recognized museum in its region