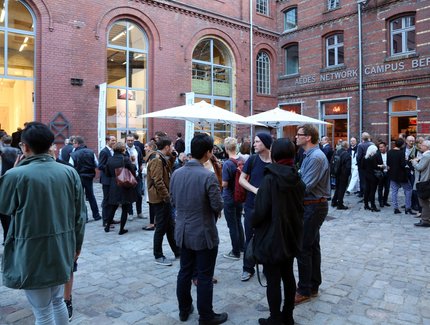 The first private forum for architecture in Germany was founded in Berlin in 1980 by Kristin Feireiss. The idea was to present architecture and urban planning in theory and practice as a part of everyday life. In the first gallery in West Berlin, Aedes attempted to demonstrate that architecture is a process and not simply a work of art by using cross-sections and glass panels in its presention of the projects in question.

A series of small booklets, which began with the second exhibition, became part of the concept. To date, more than 200 of these booklets have been published. The gallery, in the comparatively modest rooms in Grolmannstrasse, started with an exhibition by Peter and Alison Smithson. Over the course of the following years Peter Cook, Rem Koolhaas, John Hejduk etc. were shown for the first time in Germany. The gallery has, however, never enjoyed state subsidy or private, permanent sponsorship.

Interest in the work of Aedes increased as a result of higher public awareness of architecture, which was partly due to the efforts of the IBA and partly due to the public and family-oriented approach adopted by Kristin Feireiss. In 1989 Aedes moved into a new exhibition space under the railway arches at Savignyplatz. The shows became more frequent and the cast of exhibitors grew in depth and variety. Besides the well-known architects, Kristin Feireiss promoted young talent. The Café Aedes West became a place where architects could communicate directly with the public.

In 1994 Kristin Feireiss was awarded the Bundesverdienstkreuz of Germany for her continuous commitment to architecture and in 1995 she received the Literaturpreis für Baukultur of the German Association of Architects and Engineers. After German reunification she opened a second forum, designed by the Dutch architect Ben van Berkel, with her partner Hans-Jürgen Commerell. This opened in 1995 in the eastern part of Berlin.

More than 250 exhibitions have been shown since Aedes first started and the huge collection of catalogues, most of which are bilingual, are available in major art and architecture bookshops from New York to Tokyo. Because of her experience in curating exhibitions and coordinating different interests Kristin Feireiss was appointed as director of the Netherlands Architecture Institute in 1996.