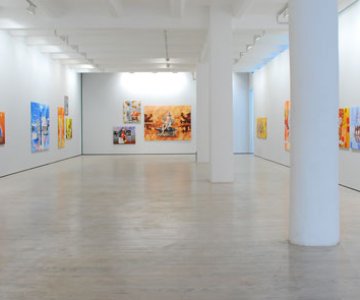 The ALEXANDER OCHS GALLERIES BERLIN I BEIJING was opened in 1997. Alexander Ochs founded the gallery with the intention of representing East Asian artists in Europe, with a special focus on Chinese Contemporary art.

Until 2003 the gallery was called ASIAN FINE ARTS I PRÜSS & OCHS. Since founding the Beijing branch WHITE SPACE in February 2004, the gallery operates under its current name.

The gallery in Beijing is now managed by the Chinese artist Tian Yuan and is autonomously developing its own program with its all-Chinese team.

The gallery is the exclusive representative in Europe for Fang Lijun, Yang Shaobin, Yin Xiuzhen and other important positions. In China and South East Asia, Fang Lijun is represented by WHITE SPACE BEIJING, amongst others.

ALEXANDER OCHS GALLERIES BERLIN I BEIJING is initiating solo exhibitions in museums for its artists, for example for Xu Bing in the Museum für Ostasiatische Kunst (the National East-Asian Art Museum of Berlin) in 2004 and for Fang Lijun in cooperation with the Berlin collector Erika Hoffmann in the Kupferstichkabinett of the Staatliche Museen zu Berlin (the National Engravings Cabinet of Berlin) in 2006. In 2002 Alexander Ochs curated a solo exhibition in the Forum Ludwig Aachen. In Asia Alexander Ochs leveraged solo exhibitions for Yang Shaobin and Fang Lijun, amongst others, in the National Gallery Jakarta. For Fang Lijun in 2006 he initiated his first solo exhibition in the Chinese museum the Today Art Museum Beijing.

The gallery has participated in various art fairs since 1999 such as the ART FORUM BERLIN, the ART COLOGNE, the ARCO Madrid and in Asia the CIGE Beijing, the ART Beijing and the shContemporary Shanghai.