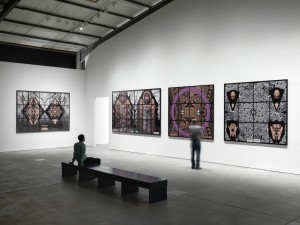 Arndt & Partner was the name of a contemporary art gallery based in Berlin, Germany, founded by Matthias Arndt, that belongs to the city’s most important exhibition sites.[1] The gallery represents a programme of international artists including Douglas Kolk, Thomas Hirschhorn, Sophie Calle and Muntean and Rosenblum.

Facing the challenge of a continuously redefining art scene, Arndt & Partner emphasised a programme free of trends or (formal) standards from the beginning. Opening a new space in the Hackesche Höfe in Berlin-Mitte in 1994, Arndt and Partner was amongst the first galleries to establish itself in the new centre of Berlin.

The discovery of emerging Berlin artists and the formation of an international programme of artistic positions which had often not yet been exhibited in Berlin nor in Germany beforehand,[1] then became the cornerstones of the gallery profile. In 1997, Arndt & Partner moved to Auguststrasse so as to contribute to the newly emerging gallery centre. There Arndt & Partner developed into an internationally operating art business, with branches in Zurich, New York City and Singapore, participating at the most important international art fairs, such as Art Basel, Art Basel Miami Beach, The Armory Show in New York, ARCO in Madrid, Zona Maco in México City and Frieze Art Fair in London.