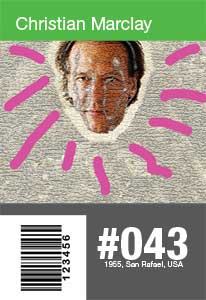 courtesy of collectionofthefame.net
Christian Marclay (American, b.1955) is a sculptor, video artist, and musician. He was born in California and raised in Geneva, Switzerland, by his American mother and Swiss father. Between 1977 and 1980, Marclay studied at the ?cole Sup?rieure d Art Visuel in Geneva; at the same time, he studied sculpture at the Massachusetts College of Art in Boston. In 1978, he studied as a visiting scholar at the Cooper Union in New York. Marclay expresses himself through Performance Art, sound, sculpture, and collage. He combines his love for music with his love for secondhand objects by molding these familiar things into unfamiliar ones. He was one of the first artists to bend and form sounds with a turntable to create new pieces. Previously, artists had linked songs together. Marclay has created unique and unexpected compositions since 1979, when he produced his Theatre of Found Sound. He developed an interest in punk rock and Performance Art while studying in Boston. The artist started singing and using mix tapes while performing with the other half of his musical duo, Kurt Hendry. Their lack of a drummer inspired Marclay to produce audio rhythm tracks that were accompanied by video rhythm tracks composed of cartoons or sex films on a loop. Marclay organized a festival in 1980 called Eventworks, where he explored the influence of rock music. He has also collaborated musically with Fred Frith, Zeena Parkins, Shelley Hirsh, Otomo Yoshihide, Arto Lindsay, and Sonic Youth, among others.
Source :http://www.artnet.com/artists/christian-marclay/biography