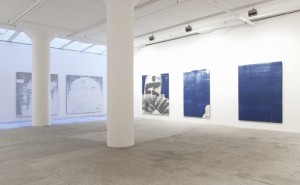 Carol Greene is an American art dealer and founder of Greene Naftali. She was born and raised in Quincy, Massachusetts and received a B.A. from Harvard University. After college, Greene moved to New York City where she began working at John Good Gallery in SoHo. In 1995, she opened Greene Naftali. In addition to her gallery, she is involved in a number of arts organizations, including Artists Space, where she serves on the board of directors. Greene lives in New York City with her partner, artist Craig Kalpakjian.