Urgent Pedagogies emerged as a result of a series of socially engaged public events held in 2018 and since then has continued to spotlight projects and discussions questioning social justice and equality, contested territories and conditions of conflict. Now an online platform and archive, Urgent Pedagogies acts as a common resource for creators and thinkers who engage with alternative art, architecture and spatial practice – ultimately seeking to transform existing methodologies and strengthen networks between practitioners. The newly launched platform profiles its network of collaborators:

The Center for Arts, Design and Social Research is founded on the principle of multiple and heterogeneous ways of knowing; emphasising plural experience through sustained engagement with indigenous, diasporic, queer, trans, post/de-colonial thought. After more than twenty research residences and convenings held in collaboration with cultural organizations, artists’ collectives and educational institutions all over the world, the Center now serves as a meeting ground for a community of artists, researchers and activists. Considering the current state of our still, privileged-led art world, organisations such as these, whose open and inclusive dialogue seek to lead with more representative narratives, are crucial in creating knowledge commons that have an efficacy in the world. 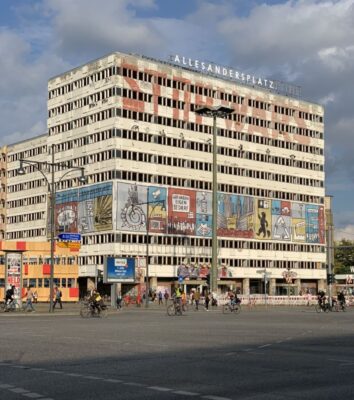 STATISTA, in Berlin, is a participatory artists’ project that has instigated an array of collaborative, creative practices in the context of city development. To prevent the sale and demolition of the Haus der Statistik, a protest was staged in September 2015. The Alliance of Threatened Berlin Studio Houses (AbBA) attached a large poster to the façade of the building, reading: ‘Here emerge: spaces for culture, education and social affairs in Berlin’. It was successful, and was not only backed by local authorities but was also given the Berlin Award – for ‘innovative and feasible’ projects. Now, over 100, 000 square-meters are available to be used for cultural activities, social infrastructure, education and affordable living. STATISTA has organised a series of projects including neighbourhood initiatives, a cryptocurrency reflecting the wellbeing of bees and a facade design built for ecological inclusivity. Success stories such as these increase the possibilities for artists to not only exist in, but transform central urban locations which can platform crucial, critical thinking . One of the organisations situated in STATISTA: Akademie der ZUsammenKUNFT, deals with topics such as migration society, urban development, integrative housing, education and art and invites interested parties to help shape the program.

Urgent Pedagogies acts as an influential hub of critical thinkers, actions, events and texts, which, when presented cumulatively, strengthens their significance and visibility. With events taking place both virtually and soon again physically, in combination with the platform’s ever-growing archive, the project is a valuable resource for the future of creative practitioners and the societies they inhabit.

Urgent Pedagogies is initiated and organised by IASPIS, the Swedish Arts Grants Committee’s International Programme for Visual and Applied Arts. The project is developed and pursued by Magnus Ericson, curator and Project Manager responsible for the design, crafts and architecture programme at IASPIS and Pelin Tan, Senior Researcher of the Center for Arts, Design and Social Research, Boston and Professor at the Faculty of Fine Arts, Batman University, Turkey. https://urgentpedagogies.iaspis.se/